On March 17th, 2015, local group of civic tech activists met with Brian Platt from the Mayor Fulop’s office to discuss recent updates and future improvements to the city’s Official Open Data Portal. The meeting was hosted by local civic tech group, CodeForJC, a brigade of CFA, at the Teen Tech Center at Boys and Girls Club in Jersey City, NJ. 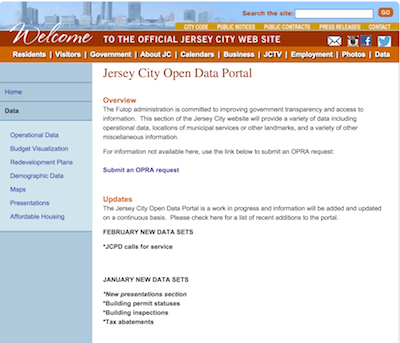 The current Official Jersey City website needs urgent upgrade to satisfy mobile friendly requirements. Candice Osborne and Brian Platt will be leading UX redesign. They will be engaging the community and civic organizations to help create a resident friendly site. The implementation will be decided during a dedicated city-sponsored hackathon and the winning team will build the new website. 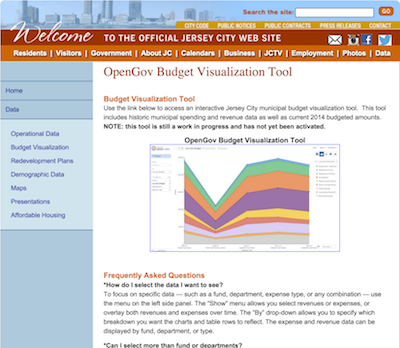 The city is interested in showing budget in form that is relevant and accessible to average resident, similar to OpenGov. Unfortunately, OpenGov does not intergrate seamlessly with the NJ state system. In New Jersey, all municipalities use the same state mandated software. Anna Lukasiak started development of city budget visualization last year. This is the link to the CodeForJC Budget Visualization. 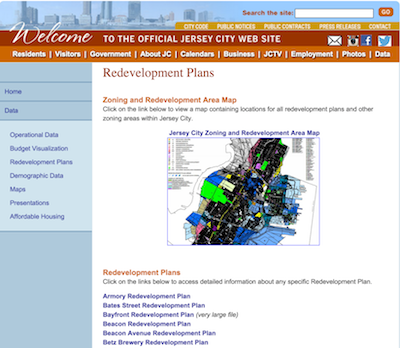 With the current increase of development in the city, the Planning Department is looking to create Interactive Zoning Map similar to Chicago’s 2nd City Zoning or Newark’s Zoning Map that will replace the current static PDF version of JC Zoning Map. The redevelopment plans documents will be included in the interactive map application as well as JCRA’s Downtown Development Map & Journal Sq Development Map. One of the key requirements is the ability for the planning department to update and maintain the most current version on the public website. 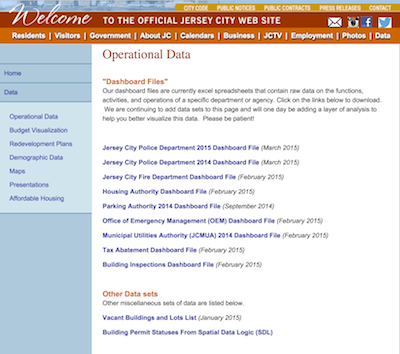 To make the currently published 9-1-1 request for service data relevant to average resident, the city wants develop a dashboard with maps and charts. Regarding publishing the raw data, it was suggested the spreadsheet be replaces with CSV files which are compatible with all spreadsheet applications, either one file per month or a single file per year with additional column indicating the reporting month. In the long term, the Public Safety Alert System project that is being developed by a OpenJC together with the JCPD, will create a real time feed with richer data.

Bike JC is working with Google to update cycling layer on Google maps (see article here) for Jersey City. The bike lanes map on the city website is couple versions behind. A workflow to update and maintain the data needs to be established. The maintenance can be performed by BikeJC and the city portal will include the link to the official Google cycling maps.

Update as of March 19th, 2015: Brian Platt engaged with BikeJC and the link to the most recent version of the JC Google Bike Map is now updated on the city portal.

To make the raw data more relevant to the average resident, the city wants to create a series of visualizations using Raw Operational Data sets published on the city’s data portal.

Data wrangling and data publishing practices and tools need to be identified to ensure all data currently posted on the Jersey City website can be automatically updated. It can include tools like open source project OpenRefine or customized scripts.

The frequently requested Tax Abatement Dashboard File was one of the recent additions to the portal. The file includes development location, abatement type, abatement duration, affordable housing contribution, project cost, current annual taxes, estimated annual service charge, permanent and temporary jobs created, etc, for abatements granted in 2014 and 2015. Upon quick inspection, an improvement was suggested add a link to the actual abatement schedule document. In addition, all outstanding + historical abatements should be made available in the future.

With expectation of a steep rise of OPRA requests in 2015 as compare to previous years, the city implemented new on-line OPRA request form using SeamlessDocs. The new public request form replaced the old process where the request was submitted by printing and filling a PDF form that had to be dropped off at the clerk’s office in person or faxed. The new on-line form enabled the city to to make improvements to the internal process, adding tracking of all requests. The current process does not provide feedback with status tracking to the requestor. Suggestions were made use an open source project, the FOIA Machine for internal and external request management. 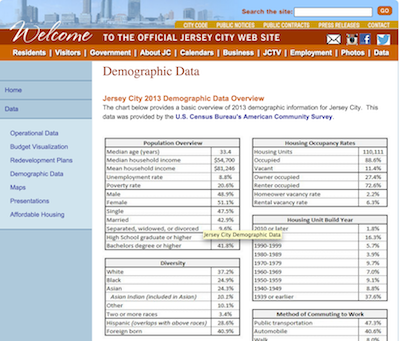 Each year, Jersey City provides local data to the American Community Survey (U.S. Census Bureau). The submitted JC data can be found here. It was suggested to create local survey to collect and submit additional information about quality of live and sustainability.

In 2015 winter season, the city in partnership with the county increased the number of crews to seven. Further, the Department of Public Works (DPW) is equipping their crews with Spatial Data Logic (SDL) tablet app with real-time workflow where crews can check off the filled potholes as they fill them out. In the last week alone, the city filled over 1,000 potholes, as compared with 3,000 potholes between Jan and May filled last year. The process of collecting information about location of potholes can be improved. The city relies on several sources, including resident requests filed with the Resident Response Center or FixIt Mobile App, phone calls, emails and text messages sent directly to DWP’s director Mark Redfield, and FB posts. The city does not have an app like Street Bump to help them automatically identify potholes.

The city is undergoing an official documents digitization process. After Sandy, FEMA provided a grant to the city to digitize damaged documents. Unfortunately many documents were lost during Sandy, but all of those that survived were digitized. Among many of the lost documents were historical documents. Clerk’s office has all documents in digital form backed up by paper copy.

The city is very close in hiring a director for the Bloomberg Innovation Grant. The initiative will focus on correlating crime and factors that are known to reduce crime, including youth recreational programs, removing blight, finding new use for abandoned buildings, quality of life index, etc. There is also an overlap with open data.